Interesting facts about the Mountain Bongo 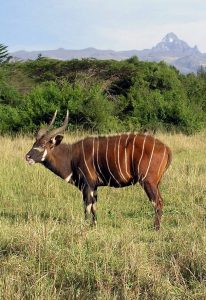 The Mountain Bongo is classified as a ‘Critically Endangered Species’ by the International Union for Conservation of Nature (IUCN). Kenya has less than 100 individuals left in the wild and 76 individuals under in situ breeding program.

The threat to the existence of the Mountain Bongo has been threefold:

In 2003, a bongo repatriation program from the USA was initiated to establish a sustainable, in situ managed bongo population at the Mount Kenya Wildlife Conservancy from which multiple wild-population recovery strategies could evolve. The principal objective of this project was to establish an in situ captive breeding program, in a natural setting, as the first phase of several conservation steps required to reintroduce mountain bongos to the wild.

Following the success of the breeding program the second phase will see the creation of a Mountain Bongo Sanctuary within Mount Kenya Forest where the Bongo will have minimal interaction with humans with no nutritional supplementation. This will transition the Bongos and make the first generation born there totally wild and ready for release to the wild by 2024 in line with the National Recovery and Action Plan for the Mountain Bongo (2019-2023). This plan envisages viable, free-ranging & genetically representative populations of Mountain Bongo, thriving across intact historic mountain ecosystem ranges, cherished by the Kenyan & global community. The overall goal of the plan is to secure minimum population size for mountain bongo within their ranges in Kenya, to achieve a national population of 750 individuals over the next 50 years. 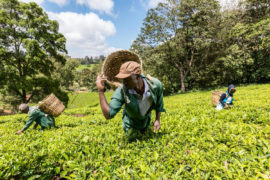